Those Beat Up, Construction Worn Out Roads

This one has been on my mind for a few weeks because there has been construction on my normal route to work. Construction is a regular part of our lives, there is no way of avoiding it. Living in a place where we have all four seasons, I do get a break from it for part of the year but only because there is so much bad weather that they can’t do it with any consistency. But, come spring and into the summer, and that the construction begin! Construction really doesn’t bother me all that much, it is the lasting effects on our roads that they get away with that does bother me. So this is what I write about today. 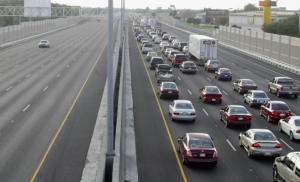 My wife and I had our home built a few years ago with the intent of never moving again. We’re very happy with their home though of course, it is one continual project after another it seems. Fortunately, the home is new enough that the projects are not so much inside rather slowly fixing up parts of the yard as we can afford it. With the weather warming up my wife has already started planning out her honey-do list, and I have my work cut out for me. We built our home in a new subdivision, so all of our neighbor’s homes were being built at the same time for the most part. Our roads were a mess well all the homes were being billed from all the construction debris, dirt and refuse that are a natural byproduct of the construction process. When we were all done, the contractor cleaned things up and we were all happy. Now new homes are being built in a subdivision just behind ours, so we are seeing some of the debris happen again.

Again, the temporary effects of the construction do not bother me. These are new subdivisions and everything gets cleaned up in the end. What bothers me is when construction or city maintenance takes place that requires tearing up roads. This really bothers me when they are tearing up a road that was put in the last couple of years. Our modern roads take a beating from all the driving that takes place and the weather. For some reason, we find it cheaper to use expensive products and replace the roads as needed rather than build a high-quality road, to begin with. Because of this, we are prone to potholes and roots breaking up and generally needing repair seemingly every year. What we don’t need is construction tearing up these roads and weakening them so they need to repair all that much sooner.

Now to what really bothers me. So construction gets a permanent to dig a trench in the road for whatever reason and then a patch it up. Why do cities not require a certain level of quality control on these things? I really don’t know what takes place in the permit process, but I do know that it seems like every patch job on these trenches is poorly done. They are either put into where they are virtual speed bumps because they are too high, or they slap in some asphalt to fast before letting the underlying Phil settle so they turn into a new trench down the middle of the street. There doesn’t seem to be any happy medium in this. Trust me, our roads do not need man-made potholes, they get plenty all by themselves.

It must be very hard to do these things well because I can only count on one hand the number of places I have seen it done right. 99% of the time (yes, I just made up that statistic) these patch jobs are done so rapidly and with such poor workmanship, they are bound to end up being a section of bumpy road in the future. What I really don’t get is when I see these type of projects tearing up the roads in fairly new subdivisions.

The recent construction that has been going on for about a month along the route I take to work has just recently been patched, and this time by the city. You would think with all those people that stand around holding up those shovels and watching, that someone would be able to direct the patch job to get it right. This one hasn’t even made it to the quality level of the least being good for a while. I was driving on it within a week of the patched up, and it’s already a rough road. Grr”¦

Unfortunately this as well those rants where I just get to complain about it and I really don’t see anything that can be done to fix it. I am not going to be one of those guys that attends a city council meeting just to wind about potholes in the way that things are patched up. I’ll just do what I usually do, and drive like I am doing some sort of vehicular slalom course, winding my way down the road avoiding the rough spots. Actually, I have made somewhat of a game of this trying to travel the most efficient path to work remembering he each spot to avoid or straddle along the way. I just read what I wrote and realized how geeky that sounded, but I don’t have any explanation for it, I am what I am.